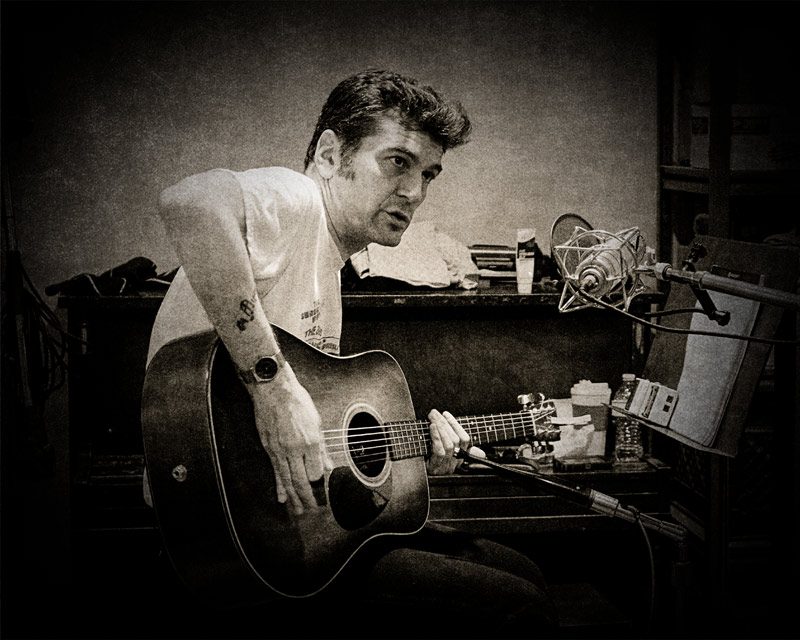 Whether jazz, country, rhythm’n’blues, Chicano soul, exotica, or any style you can name, Skip Heller has been there and done that his way.
Born and bred in the Philadelphia barband scene of the early 1980s, Heller first gained local notice as an ecletic young guitar hero.  He became the opening act of choice for national acts like Rick Danko, John Hartford, Dave Alvin, and Walter Hyatt.  His two local early 1990’s CD’s established him also as an incisive songwriter as well, drawing on classic soul, jazz, and bossa nova while staying rootsy.  In 1993, Heller discovered the music of exotica godfather Les Baxter and was so moved that he wrote the older composer a letter asking for copies of written music.  Baxter was so taken with Heller than he invited the young whippersnapper to come to Palm Springs and study with him.  Within a year, Heller had moved to Los Angeles and started working with artists from exotica diva Yma Sumac to Stan (Wall of Voodoo) Ridgway, rockabilly original Ray Campi, rhythm’n’blues sax giant Big Jay McNeely, and the Rather of Chicano Music, Lalo Guerrero.
Music for film and TV, including The Flintstones and Sesame Street.  Live and studio work with NRBQ, Glen Glenn, Wanda Jackson, Flaco Jimenez, Cannibal and the Headhunters, Bob (Schoolhouse Rock) Dorough, Uri Caine, Tish Hinojosa, the Klezmatics, the Latin Playboys, and even Ogden (“Dead Puppies”) Edsel.
His band, Carnival of Soul, is mainstay in the Los Angeles clubs and have just release an EP.
And his new recording, SACRAMENTO, is available on all the digital platforms as well as CD.
More About Skip Heller at www.en.wikipedia.org/wiki/Skip_Heller
Share 0
Tweet
Share
Share
Share