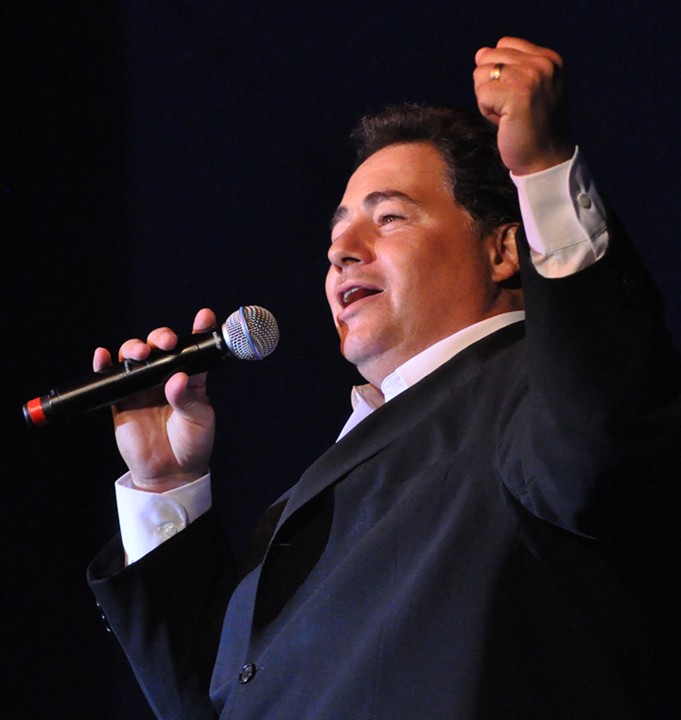 To those who have come to love him as the “singing policeman,”—the New York City cop who helped bring the country an uplifting spirit of promise and hope with his stirring rendition of “God Bless America” after the September 11 terrorist attacks—it is no surprise that Daniel Rodriguez has always been a spiritual man. His first two albums, the debut SPIRIT OF AMERICA and the romantic FROM MY HEART, both included a spiritual song as a testament to the driving force in his life, and he has welcomed the opportunity to work with institutions such as the USO, the City of Hope, Dr. Robert Schuller’s Crystal Cathedral and numerous law enforcement organizations.

Thus, IN THE PRESENCE, his first album devoted to inspirational music released by Seattle-based Blix Street Records, is a gift whose time has come. For the album, Rodriguez applies his rich and warm tenor to traditional spiritual and church songs as well as contemporary gems. Taken together, the record brings the same spirit of healing and compassion that he brought the country in those days after September 11. Clearly, Daniel’s strength is in translating music into the warm embrace of community.

“I’ve always wanted to record an inspirational album,” Daniel says. “Every album I’ve done has included a song of faith on it. In concert, I often end with ‘God Bless America.’ The theme of God and country has always been a part of my life, so I thought my next album should be something that really outlines what I believe in. It’s really a universal album.”

Salonga teams with Daniel on Andrew Lloyd-Webber’s “Pie Jesu” from “Requiem” and the traditional “Panis Angelicus.” “We knew we were going to do ‘Panis Angelicus,’” Daniel says of his plans with Salonga, whom he met while both were doing a project with the West Point Glee Club. “While in the studio, I asked her if she would try ‘Pie Jesu,’ and she came and laid down one of the most beautiful renditions I’ve ever heard.”

Rodriguez and Carl had met when Daniel started performing at the Crystal Cathedral. “We were speculating that because Johnnie wrote for the Cathedral, which is such a cavernous space, that his arrangements would be just as lofty,” Daniel suggests. “It was a great marriage because I love full orchestras and powerful music. There was a brilliance to his art. ‘Amazing Grace’ builds with intensity and incorporates the theme from Ravel’s ‘Bolero’ in a dramatic finale. I don’t know anyone else who would have thought of that. I’m proud to be recording his last works.”

In addition, Carl’s vision lives on in the songs “How Great Thou Art” and “On Eagles’ Wings.”

The record also contains traditional works such as “Joyful Joyful,” “Ave Maria” and “Nearer My God To Thee,” which comes in two versions. One is arranged in a Spanish style by Allyn Ferguson—tapping into the roots of Daniel’s Spanish-speaking heritage, having grown up in a Puerto Rican home—and the other is a larger than life arrangement by MGM veteran Sammy Nestico

In a more contemporary vein, Daniel includes “An American Hymn,” which was arranged by the song’s composer Lee Holdridge and has been recorded by Placido Domingo, and the Celtic-flavored “The Water Is Wide.” Both songs tied into the goals Daniel set for IN THE PRESENCE.

“I chose music that would achieve continuity among the three albums I’ve recorded,” says Daniel. “‘An American Hymn’ relives the patriotic sentiment of my first album, THE SPIRIT OF AMERICA. ‘The Water is Wide’ conveys a feeling of deep love that builds a bridge to my second CD, FROM MY HEART. The overall spirituality of IN THE PRESENCE connects all three.”

For the second time, Daniel recorded in Prague with the stellar musicians of the Czech Philharmonic Chamber Orchestra. The setting brought a true Old World essence to songs that have endured the test of time.

“Prague has this great atmosphere,” says Daniel. “There is a sense of being at home, being comfortable. The old city is gorgeous, and for the time you’re there, you feel part of its old European tradition.”

As with every “overnight” success, Daniel’s road to his current place as “America’s Beloved Tenor” was long and rife with all the detours and potholes of every life path. He began singing in his youth, the product of a musical, multi-cultural family where his Puerto Rican roots intermingled with the rich fabric of New York City. His father and grandfather both sang. Others in his family played various instruments. By junior high school, he was enrolled in theater arts and performing in musicals as well as dramatic roles.

At 16, he presented his first recital at Carnegie Hall; at 17, he was billed as the “17-year-old Baritone.” Then, at 19, he put music aside to raise his family, going to work to make ends meet. For five years, he did just about any job that would put food on the table: short order cook, catering chef, cab driver, truck driver. But, at 24, he decided to go back into music, which he did with a very entrepreneurial spirit.

“I hired a piano player, dusted off my sheet music from Carnegie, rented a hall, made out the flyers, sold tickets, collected the money at the back of the house, then went to the front, put on my tux and did the show,” he remembers. “I made $200, and I began my trek back into the music business.”

He invested his money at Kinkos in a cover letter, some 8×10 photos and a program of the music with a few reviews and shipped them out in a folder to every church in the Yellow Pages. He started getting offers for shows.

“I thought of churches,” he recalls, “because of my years as Leader of Song, participating in countless weddings and funeral services. Also, churches come with their own audiences. They’d do the selling, I’d give them a modest rate, and it would basically be a fundraiser, and it started to steamroll. Every opportunity that came my way, I welcomed with open arms.”

Meanwhile, he worked at the post office, and then as a police officer in the New York City Police Department. It was in uniform that local New York audiences began to discover his voice and his passion for the music he sang. As an “official singer” for the NYPD Ceremonial Unit, he sang at official functions, and later, at memorials in the aftermath of the September 11th attacks.

Before long, then-New York Mayor Rudolph Giuliani helped set up an audition at the Metropolitan Opera that Daniel now calls “a tragedy.” “What makes you think a policeman can sing at the Met?” was the first comment that greeted him as he arrived. He was only allowed to sing two notes before being dismissed.

Through the Mayor, Placido Domingo heard the story, and he told Giuliani he would give the singer a listen. Domingo was in the planning stages for his Young Artists program at the time.

“The same day the Yankees won the Pennant in 2001,” says Daniel, “I went to the Met and sang for Maestro Domingo, and he invited me to study with him in Washington. I left the Met on a cloud, sang the National Anthem at Yankee Stadium, saw the Mayor, told him what had happened, and he said, ‘You have to do that, it’s your calling,’ and I said, ‘Well, you’ll have to give me the time off.’” Daniel studied with Maestro Domingo for a year and half.

Since then, he has performed at the 2002 Winter Olympics, the PBS Memorial Day concert in Washington, D.C., the Tournament of Roses Parade, the 2004 Republican National Convention and President Bush’s “Celebration of Freedom” Inauguration concert, and on television’s “The Late Show with David Letterman,” “Larry King Live,” “Live with Regis and Kelly” and “Oprah,” among many other high profile events. He officially retired from the NYPD in June of 2004.

Now with three records under his belt, Daniel is looking to the future with the same inquisitive optimism that has brought him to this point. His goals include the Broadway stage, opera and, possibly, acting in dramatic roles. “I don’t want to limit myself,” he says. “For me, life is an experience, life is a ride; you can’t say ‘I’m going to take this road, and that’s it.’ Life has twists and turns, and you have to be able to navigate through them. Always consult your higher power. And let yourself be led too. People say ‘What do you want to do?’ and I say, ‘Well, God knows what I’ll be doing. I just kind of follow the signs.’ There have always been doors that open for me, and it’s having the courage to walk through them and experience what’s behind them that has made life interesting and has gotten me where I am. It’s about enjoying the ride.”