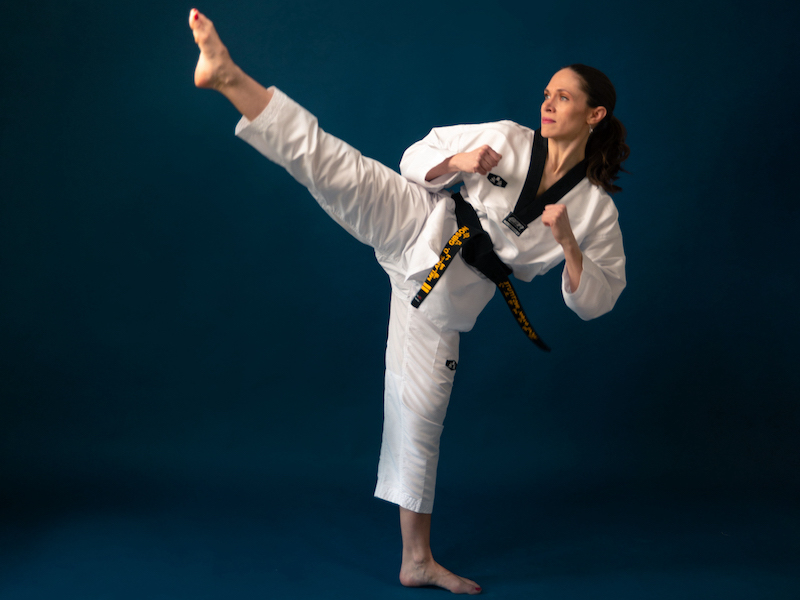 Melanie Gibson began taekwondo training at age ten. At age twelve she stopped taekwondo to pursue other interests, and resumed training in her early thirties.

Although Melanie had academic and career achievements throughout her life, she struggled with mental illness and low self-esteem. After making some progress through psychiatric treatment and counseling, she knew she needed to do something more substantial to make lasting changes. Returning to taekwondo had always been in the back of her mind, and the timing was right.

Taekwondo proved to be not only an opportunity to re-learn a beloved skill from her childhood, but also a means to build her self-esteem and confidence, and heal from old wounds. It brought a needed excitement and purpose to her life, which she shares in her blog Little Black Belt (http://littleblackbelt.com). While continuing to work at her full-time job, Melanie dedicated herself to taekwondo training and earned her first degree black belt in 2015. In 2017, she earned her second degree black belt. Although a pandemic and knee injury sidelined her training in 2020, Melanie plans to return to taekwondo and test for her third degree black belt.

Melanie Gibson was an independent woman with a good job, multiple college degrees, and a condo in the trendy part of Fort Worth. She also had a few mental illnesses, a minor substance abuse problem, and rotten relationship skills. She was nearing a total mental breakdown and needed a good kick in the pants, literally and metaphorically.

As a last desperate means to save her sanity, Melanie turned to a nearly forgotten childhood activity: the Korean martial art of taekwondo. To her surprise and delight, she discovered her childhood taekwondo instructors’ Grandmaster operated a taekwondo school a few miles from her home. She restarted her training as a white belt and quickly learned that taekwondo had much more to offer than just learning how to kick and punch.

In taekwondo, Melanie felt like she had a fresh start in more ways than one. She found an inner peace she’d never known before, a sense of community, a newfound confidence, healthy relationship stability, and a positive outlook on life. The kicking and screaming she was doing in class quieted the long-suffering kicking and screaming in her mind. Funny and frank, Kicking and Screaming: A Memoir of Madness and Martial Arts  is the story of Melanie’s life-changing journey from troubled, lost soul to confident taekwondo black belt.

More about Melanie Gibson at: littleblackbelt.com