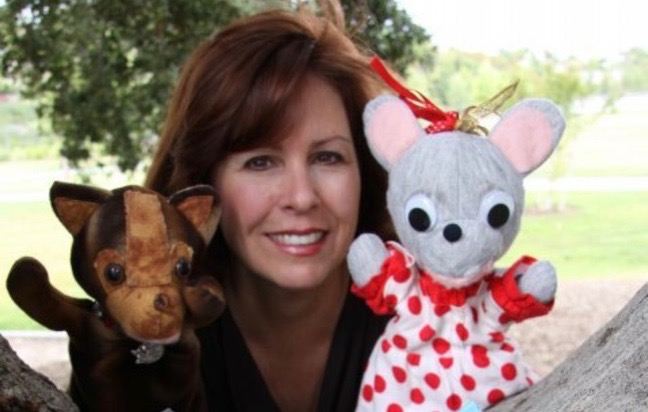 Allie Jo Thomas is a singer/songwriter who was raised in Sun Valley, CA.  She attended Village Christian High School and Cal State Northridge University where she majored in Theater Arts.  During her college days she began singing in a few local rock bands… and while waitressing at Bob’s Bib Boy in Burbank, she met and fell in love with a Professional Boxer named Joe Kowalski.  They married in 1983.

Today allie is a Mother, a Grandmother, and a Sunday School teacher who loves to write songs and jingles.

In 1999 Allie and her family decided to have an adventure and moved to Tennessee to pursue her dream to be a Country Singer and Songwriter… In 2003, after completing a lullaby CD for Chelsey Studios in Brentwood, Tennessee, ALle was asked by Jill Larsen of Chase – West Productions, to record a Country Children’s CD at Jay’s Place on Music Row… within a span of 3 years, she recorded 4 children’s CDs (one for each Season), entitled “Kids, Critters and Country at Allie’s Place.”

Allie’s Children’s Music actually has a Country/Theater feel to it, since she was heavily influenced by all of the popular theatrical music that she was hearing while bringing her young daughters to dance classes for so many years…

Allie has won some songwriting contests including the COW Fest.  She has performed many times for “Thomas the Train” at the Filmore Train Station in California, and in Chicago, IL, for “I Love Music,” week, and also in Puerto Rico…

Her music is loved and enjoyed by children of all ages from the tiniest of tots to precious Grandparents and Great grandparents.  Allie’s music is wholesome and very family oriented as she tries to give something to everyone when she is singing…

Allie’s music is refreshing and uplifting… usually including heartfelt story/songs about her life when she was raising her children…  Allie loves to encourage and inspire children and grown-ups to “Reach for the Stars.”

She sings in schools, churches and festivals… since Allie’s real name is Alice… (she was named after the lead character in Walt Disney’s “Alice in Wonderland” movie), she is a huge Walt Disney fan.  Her dream is to someday work for “the mouse.”

Her Father, a U.S. Marine who was in Korea, worked for many years for MAYPO (that’s short for M”Mary Poppins) in Burbank, CA… where he always wanted her to audition… Allie, (who is presently a happy caregiver for a wonderful young man named Daniel), hopes to accomplish that dream sometime in her future…

Learn More About Our Guest Allie Jo Thomas at www.cdbaby.com/Artist/AllieJoThomas